After slow start, East Ridge cruises to victory over Eastview

Quarterback Riley Larson rushed for two TDs in a 28-point third quarter for the Raptors. 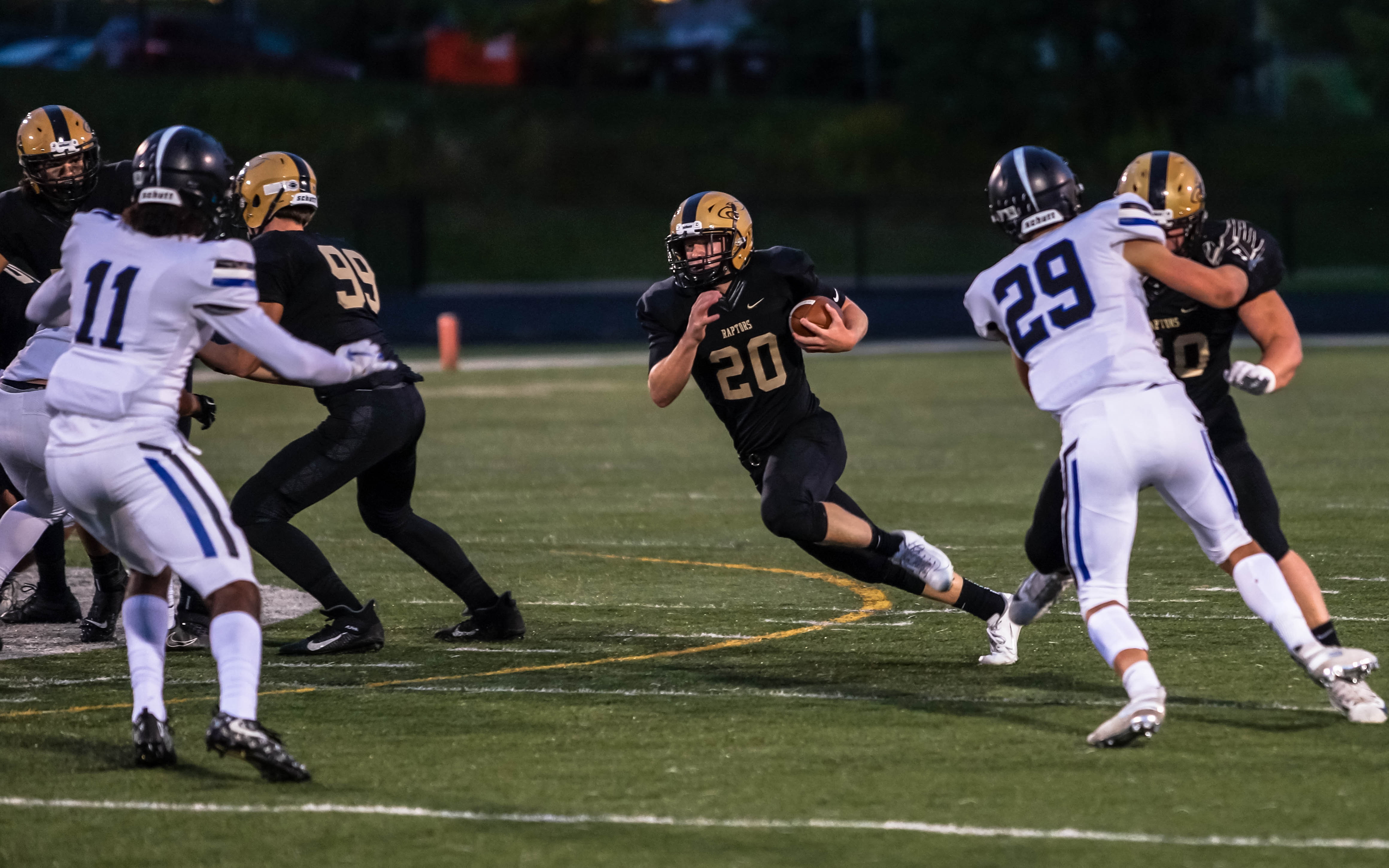 So few opportunities, in fact, that he played primarily as an outside linebacker to go along with backup quarterback duties for a Raptors' team that finished 6-4.

But standout quarterback Zach Bebrowkski, who is now on Southern Illinois University’s roster, graduated last spring which left an opening.

Now Larson is one of two quarterbacks taking turns in the driver's seat of an offense helping to navigate East Ridge (1-2, 0-1) through a stretch of games against three teams currently ranked in the Associated Press statewide poll.

With multiple quarterbacks on the roster who regularly play, Larson doesn’t take his opportunities lightly.

"I have two quarterbacks behind me who are unbelievable," Larson said of fellow Raptor quarterbacks, Jackson Turner and RJ Sackett. 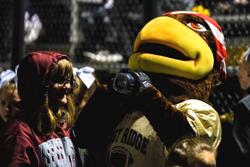 Larson and Turner helped lead the Raptors offense to a 28-point third quarter in a 42-14 victory over No. 6-6A Eastview Friday at East Ridge High School in Woodbury.

Larson rushed for two touchdowns and added a 25-yard TD pass to Brody Kriesel. Turner also produced at the quarterback position, delivering a flea-flicker 19-yard touchdown to Kriesel in the third quarter.

East Ridge's quarterbacks were not the only players with opportunities to step up into new roles and make plays Friday.

Linebacker Ben North forced two turnovers in the breakout third quarter for East Ridge. The junior said he played sparingly during last fall's varsity season. But with a new role as a starter on the defense, he was able to take advantage by grabbing two interceptions — including one he returned for a touchdown.

"The first one was more him than me, and then the second one I had a pretty good break on it," North said.

Eastview, which entered Friday's game with wins this season against Minnetonka (21-17 in Week 1) and Burnsville (34-6 last week), saw its offense stall for almost two quarters after Quintcy Suggs scored on a 1-yard touchdown run in the second quarter, breaking a 0-0 tie. The Lightning couldn’t find the end zone again until the fourth quarter, when Andrew Titcombe hauled in a 34-yard TD pass from Max Sherwin.

Suggs led the Lightning ground game with 77 yards on 21 carries, until he left with an apparent injury in the third quarter.

East Ridge coach Dan Fritze said he felt his team didn’t play poorly in its two losses to open the season. After Friday's win, however, he thinks things are starting to click.

"Any time you have kids who have never played before, you need to get their feet wet a little bit. Those first couple of games, it's not that they didn't play well, but now I think they really understand what it takes.” 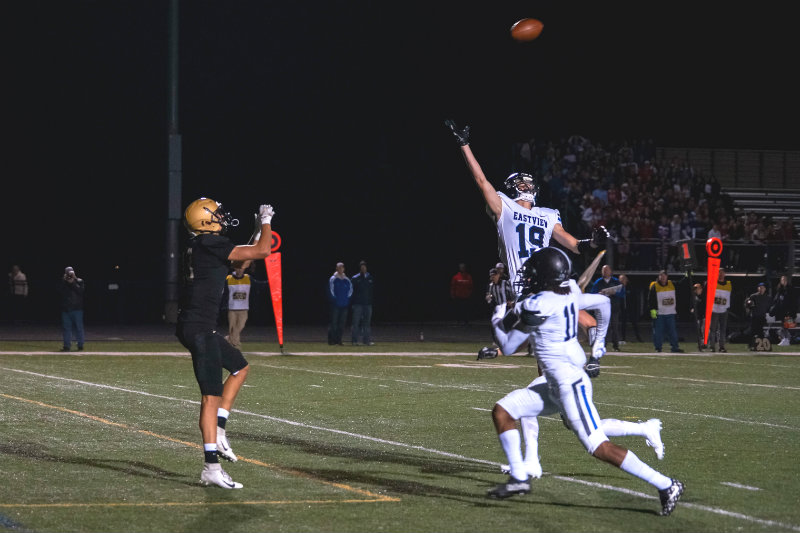 Raptors wide receiver Brody Kriesel (left) awaits a catch behind Lightning defenders in the end zone for his second touchdown of the night. Photo by Korey McDermott, SportsEngine

East Ridge did more than enough to put its season-opening two-loss start in the rearview mirror with a 42-14 win Friday over visiting Eastview, ranked No. 6 in the Class 6A Associated Press statewide poll.

Playing their third consecutive ranked opponent, the Raptors (1-2, 0-1) broke away with a 28-point third quarter thanks to some help from Ben North, who had two interceptions. North returned one for a touchdown.

The game was tied 7-7 at halftime with Eastview's Quintcy Suggs scoring on a one-yard touchdown run.

Eastview (2-1, 1-0) scored again in the fourth quarter on a 34-yard TD reception by Angelo Paulucci. 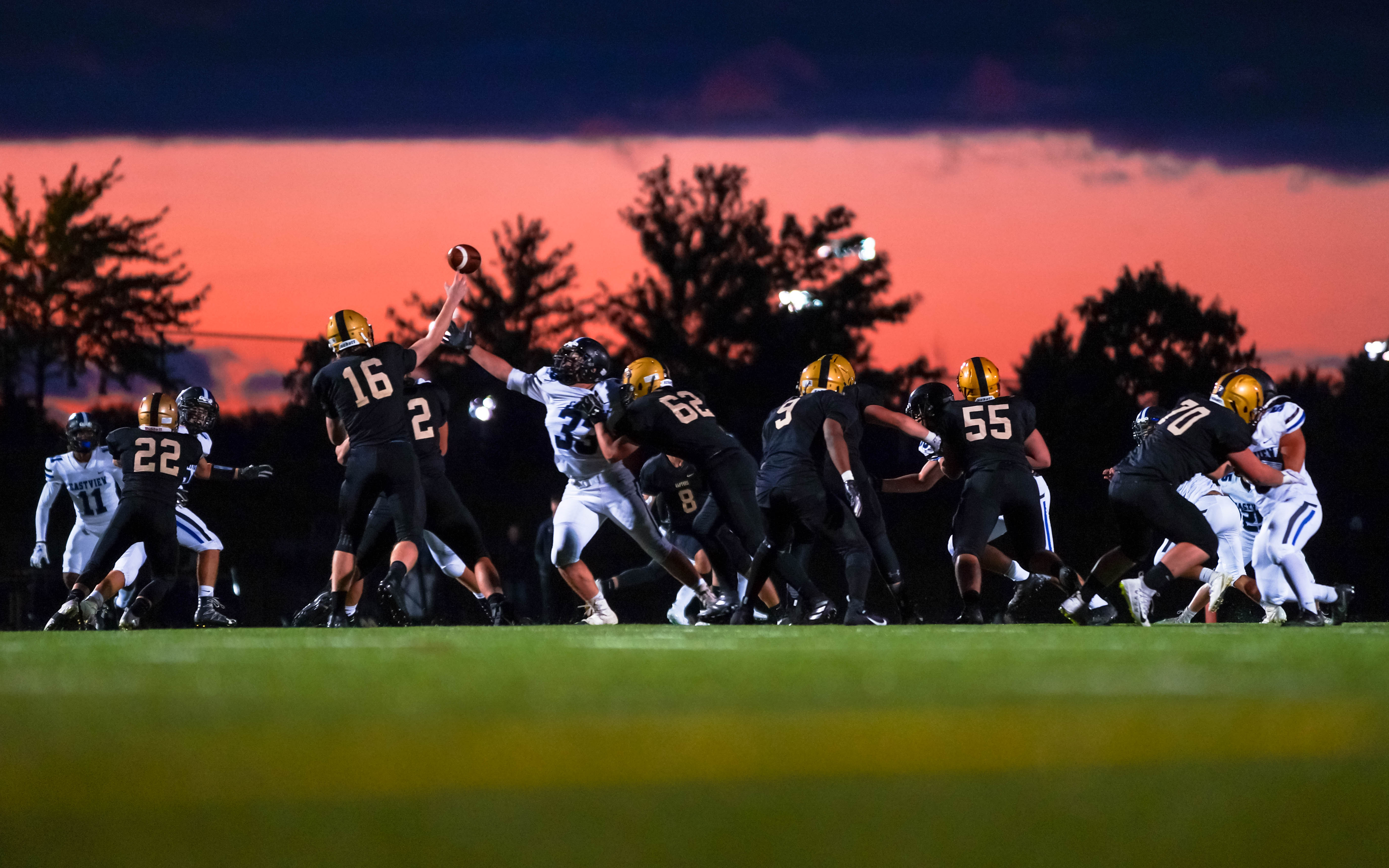 The sun was setting as East Ridge hosted Eastview for an early fall showdown on Friday the 13th. The Raptors defeated the Lightning 42-14. Photo by Korey McDermott, SoprtsEngine