As foreshadowed by my colleague David La Vaque in a story last week, the games Friday night were peppered with better play and big performances missing in week 1. 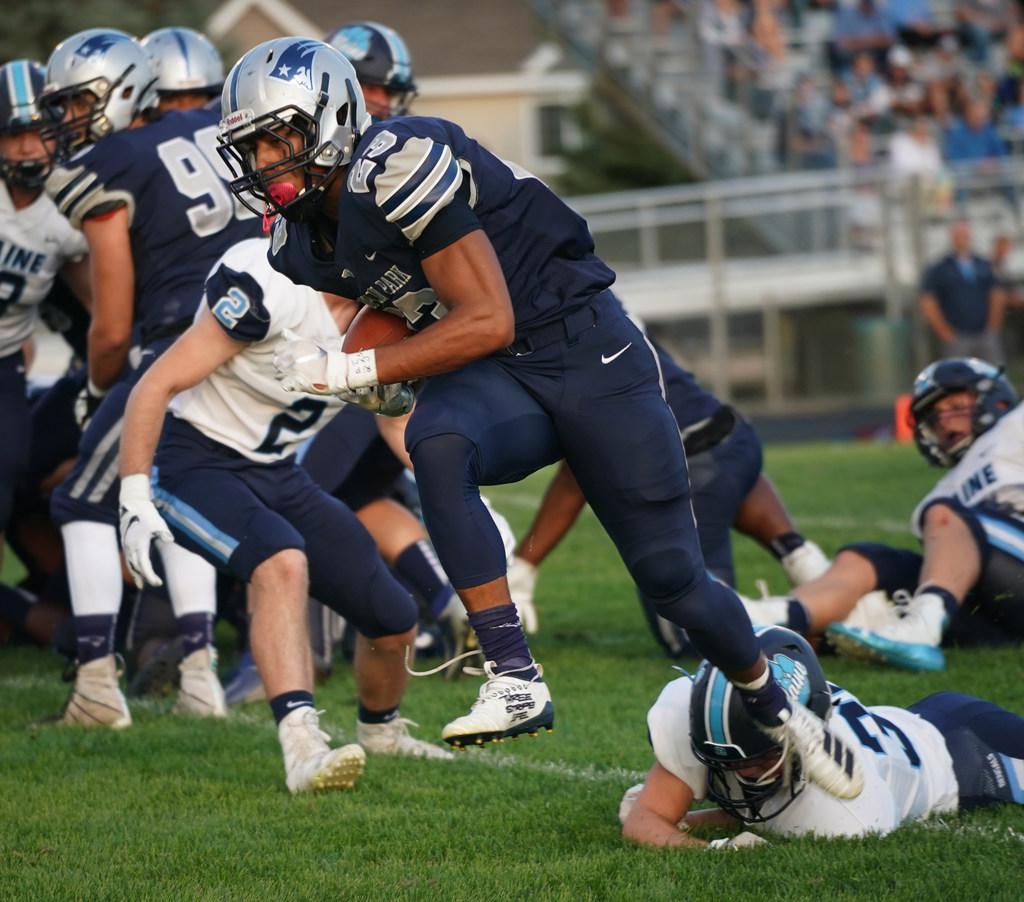 Champlin Park running back Shawn Shipman had 220 yards and two TDs against Blaine as the Rebels cranked up an offense that struggled a week earlier. Photo: Shari L. Gross • shari.gross@startribune.com

My colleague, David La Vaque, wrote an insightful piece last week about the improvements teams make between the first and second week of the season.

Proof? Aidan Bouman-led Buffalo was scarcely competitive in a season-opening loss to Alexandria but gave Elk River all it could handle in a 46-37 loss Friday.

Champlin Park put up 447 yards of offense in beating Blaine on Friday after having just 128 in Week 1. St. Louis Park was shut out at home by Chaska but followed with an impressive 27-17 victory at Waconia. Spring Lake Park got little going against Armstrong in a 21-0 Week 1 loss but routed rival Irondale 34-7 Friday.

Here’s how I see this week’s Metro Top 10. If you have any complaints or want to make a case for your team, I’d love to hear them.

1. Lakeville North (2-0): The Panthers were unfairly chided last week over their “No apologies” slogan by an early-afternoon radio mouth who couldn’t comprehend its meaning. Too bad for Eagan, which had to take the brunt of an aggravated team in a 56-0 Lakeville North victory.

2. Eden Prairie (2-0): Concerns over Eden Prairie’s losses to graduation were obviously just preseason speculation. The Eagles have looked every bit like their old selves in outscoring their first two opponents 83-7.

3. St. Michael-Albertville (2-0): A mistake helped put the Knights in an early hole, but three consecutive first-half touchdowns remedied that and lifted them to a 21-14 victory at Minnetonka.

5. Mounds View (2-0): The Mustangs’ newly installed read-option offense is still a work in progress, but the defense has been steady, giving up just 13 total points.

6. Prior Lake (2-0): In what is on its way to becoming heated rivalry, the Lakers had to hang on to pull out a 14-12 victory over much-improved Shakopee.

8. Champlin Park (2-0): RB Shawn Shipman was the definition of workhorse, running for 220 yards and two TDs on 39 carries, and the Rebels played ball-control to hold off rival Blaine 28-17.

9. Farmington (2-0): It’s obvious the Tigers can put up points — they’ve scored 91 in two games. Will they be able to maintain this offensive output when the schedule turns significantly tougher in a couple of weeks?

10. SMB Wolfpack (Class 4A) (2-0): Some displeasure has been expressed about a Class 4A team occupying this spot. And those concerns are valid. But this team has too much high-end talent to simply dismiss because it plays in a smaller class.