The Spartans, with four touchdown plays from 37 to 81 yards, prevailed 49-34 in a wild offensive show by both teams. 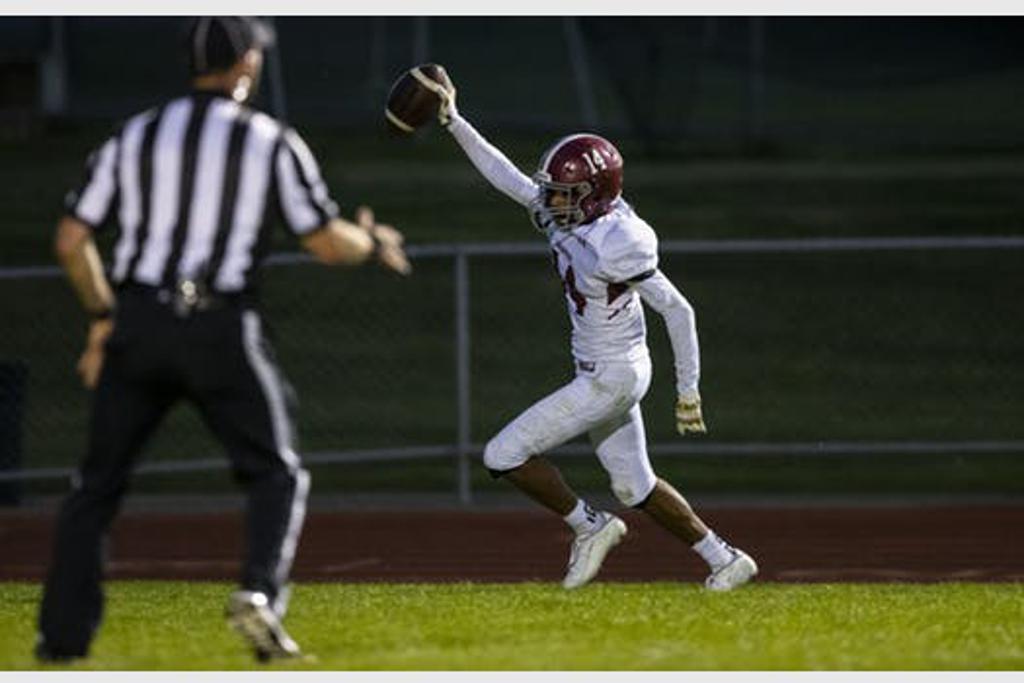 Richfield wide receiver Mitchell January (14) celebrates after scoring a long touchdown at the end of the first half of Friday's game. Photo: Alex Kormann * alex.kormann@startribune.com

Richfield coach Kris Pulford held the game ball after the first victory of his career and the Spartans’ first in three years because his players held their heads high despite a slow start.

Down two touchdowns before the game Friday at St. Croix Lutheran was eight minutes old, Richfield rallied for a 49-34 victory and ended an 0-19 losing streak.

Jubilant players threw water and water bottles on the sidelines in the final seconds. After shaking hands with Crusaders players, the Spartans celebrated with their classmates who rushed the field.

“It’s so fun to see those guys be excited because they haven’t been excited about football in awhile,” said Pulford, a 2004 Richfield graduate.

Excitement came from explosive, and at times improbable, touchdowns.

Lamar Grayson cut and dodged his way to a 37-yard scoring run and trimmed St. Croix Lutheran’s lead to 14-6 in the first quarter.

Then quarterback Ryan Miles corralled a ball snapped over his head and ran 81 yards for a touchdown past a bewildered Crusaders sideline.

“Right when I picked it up, everybody was in front blocking and I just said, ‘I’ve got to go,’ ” Miles said.

The play tied the game 14-14 but there was no reason for St. Croix Lutheran to fret. New coach Adam Frey inherited a program that placed second at the Class 3A Prep Bowl in two of the past three seasons. Sure enough, quarterback Zach Longueville put the Crusaders ahead 20-14.

The difference Friday, however, was Richfield’s refusal to fall short.

“It was a different energy, most definitely,” junior running back Gustavo Segovia said.

And they had the playmakers to help realize their comeback hopes.

“I felt our team was more athletic than theirs,” Miles said. “And I had trust in my teammates to do what they were supposed to.”

Miles scored on a 20-yard touchdown run and added a 57-yard scoring pass to Mitchell January before halftime for a 26-20 lead.

When St. Croix Lutheran drew even in the third and fourth quarters on touchdown runs, Richfield responded each time. Two touchdown passes from Miles – the second after grabbing another ball snapped over his head – gave the Spartans a commanding 42-34 lead.

A flurry of explosive scoring plays helped Richfield secure a 49-34 victory Friday at St. Croix Lutheran and end an 0-19 losing streak dating back to 2016.

Touchdowns covering 37, 81 and 57 yards -- and another for 37 yards – kept the Spartans ahead in a wild offensive display by both teams.

Richfield quarterback Ryan Miles ran and threw for scores, including once after the ball sailed out of a shotgun snap and over his head. His ability to stay poised and make plays despite the chaos was key on Friday.