Football A to Z: Let the new season begin

As the 2019 season kicks off with games Thursday and Friday night, staff writers David La Vaque and Jim Paulsen recite the alphabet along with 26 reasons to get excited. 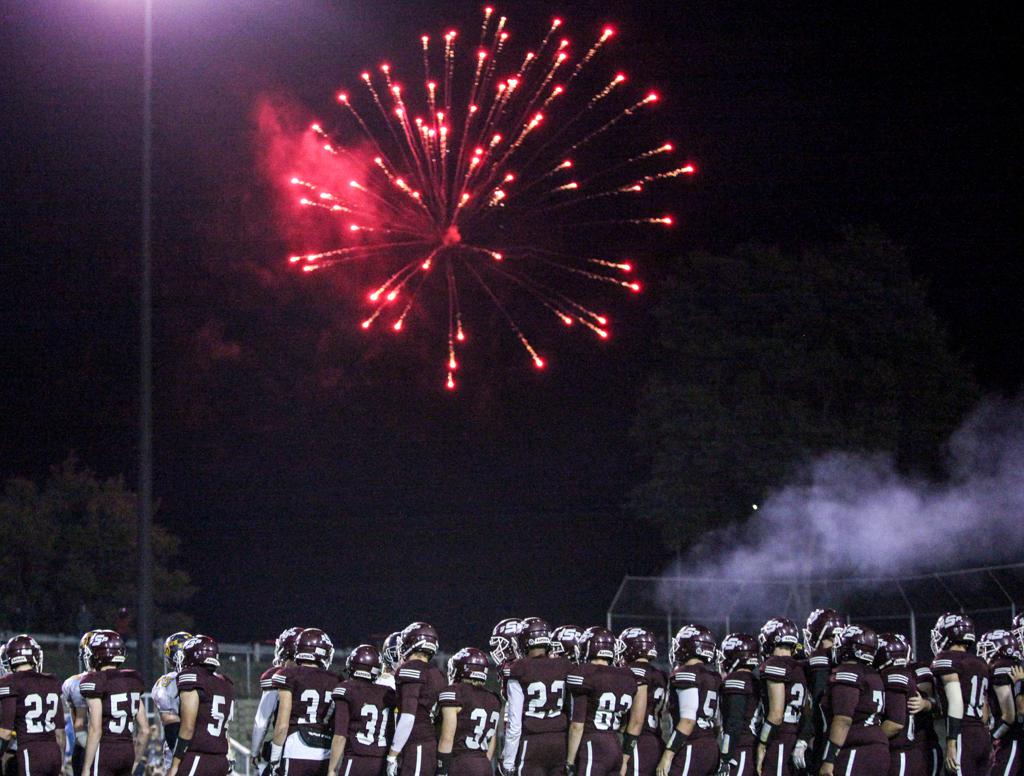 South St. Paul celebrated a win with fireworks at venerable Ettinger Field, one of the classic stadiums in the metro area. Star Tribune file photo

Big Cat, the traveling trophy that goes to the winner of the annual game between Lakeville North and South. The last time South took home the trophy was 2009. Will the streak end this year?

Candy, which rains down on the Totino-Grace bleachers, courtesy of fans who throw handfuls whenever the Eagles score.

Dave Nelson, the Hall of Fame Minnetonka coach who hails from one of Minnesota’s great football families. A true ambassador for the high school game and as gracious as they come.

Ettinger Field, the venerable home of the South St. Paul Packers, sits staunch and sturdy, with a rugged, old-school character befitting the surrounding neighborhood. A treasure.

Friday nights, when communities come together — old-timers, parents, fellow students and thrilled youngsters — around the local team. You don’t even have to like football to appreciate fall Fridays.

Grant, as in Mike, the shrewdest mind in prep football. He calls plays from the sidelines without the benefit of a chart or a headset and has a recall that makes an elephant seem forgetful.

Iowa State, which has landed three of the highest-rated players in the state: Aidan Bouman (Buffalo), Craig McDonald (SMB) and Hunter Zenzen (Barnesville).

J is for Jalen, the first name of two of the top players in the metro (Suggs and Travis). Or perhaps Justice, as in Sullivan; Jaice, as in Miller; and Jordan, as in Titus. All preseason Dream Team selections.

Kaden Johnson, the SMB linebacker and only four-star recruit in the Class of 2020. While Suggs supplies the legs and the arm to make the Wolfpack go, it’s Johnson — not yet committed to a college — who provides the guts.

Lundeen, Dwight, the longtime Becker head coach who is enters his 50th season. He’s the only head football coach in school history. He has won three state championships and is third in career victories with 359.

North, as in Minneapolis. Five consecutive state tournaments and the only state championship (Class 1A, 2016) for the city since 1977. Coach Charles (OA) Adams has developed consistent excellence under difficult circumstances.

Play clock. A 40-second play clock rolls out this season, mandated by the National Federation of High School Associations. The desired effect: Faster place of play and fewer complains about teams receiving added time. The clock starts when a play ends, not after the ball is spotted.

QRF. Last season the Quality Results Formula was used to seed the postseason for all but one section of football from Nine-Man to Class 5A. The algorithm ranks teams according to non-subjective factors such as victories and losses, opponents’ victories and class differential.

Rallying for improbable victories. In 2017, Maple Grove erupted for three touchdowns in the final 59 seconds for a 29-27 comeback against St. Michael-Albertville. The stunned Knights changed their fortunes last season, scoring 29 unanswered points in the final seven minutes to shock Edina.

South. History will be made Thursday at Minneapolis South as Tigers’ players and fans will enjoy the first home game under lights in school history. A fundraising campaign provided turf and lights.

Traveling trophies. From Anoka’s Pumpkin Bowl Trophy, which the Tornadoes have put on the line against their final regular-season opponent since 1950, to the Pizza Paddle, which Milaca and Princeton will begin playing for this fall. Plus the Bay Bell, Hatchet, Musket, Wedge and many others statewide. They make game days extra special.

U.S. Bank Stadium. Home of the football state tournament semifinals and Prep Bowl. By the way, instant replay, which Minnesota started as an experiment at the 2017 Prep Bowl, is now the national standard.

Verndale, where Mike Mahlen is seven victories shy of becoming the first Minnesota football coach to win 400 career games. The Pirates, a Nine-Man program, have won at least seven games for the past seven consecutive seasons.

Wide receivers. With growing use of spread offenses and football coaches striving to attract more athletes from sports such as basketball, Minnesota’s next Larry Fitzgerald, Michael Floyd or Adam Thielen might not be far away.

Xylophones. Hey, we needed an X word. But seriously, bands play them at halftime. None better than the Rosemount Marching Band.

Youngsters. Both the kids in football jerseys who are into the game and the junior high kids usually just there to see and be seen.

Zebras. Shout out to the referees. They have the toughest job in football.