Courtesy of John Olson's kick, the Cougars took a 13-10 lead with 13.5 seconds remaining in the game. 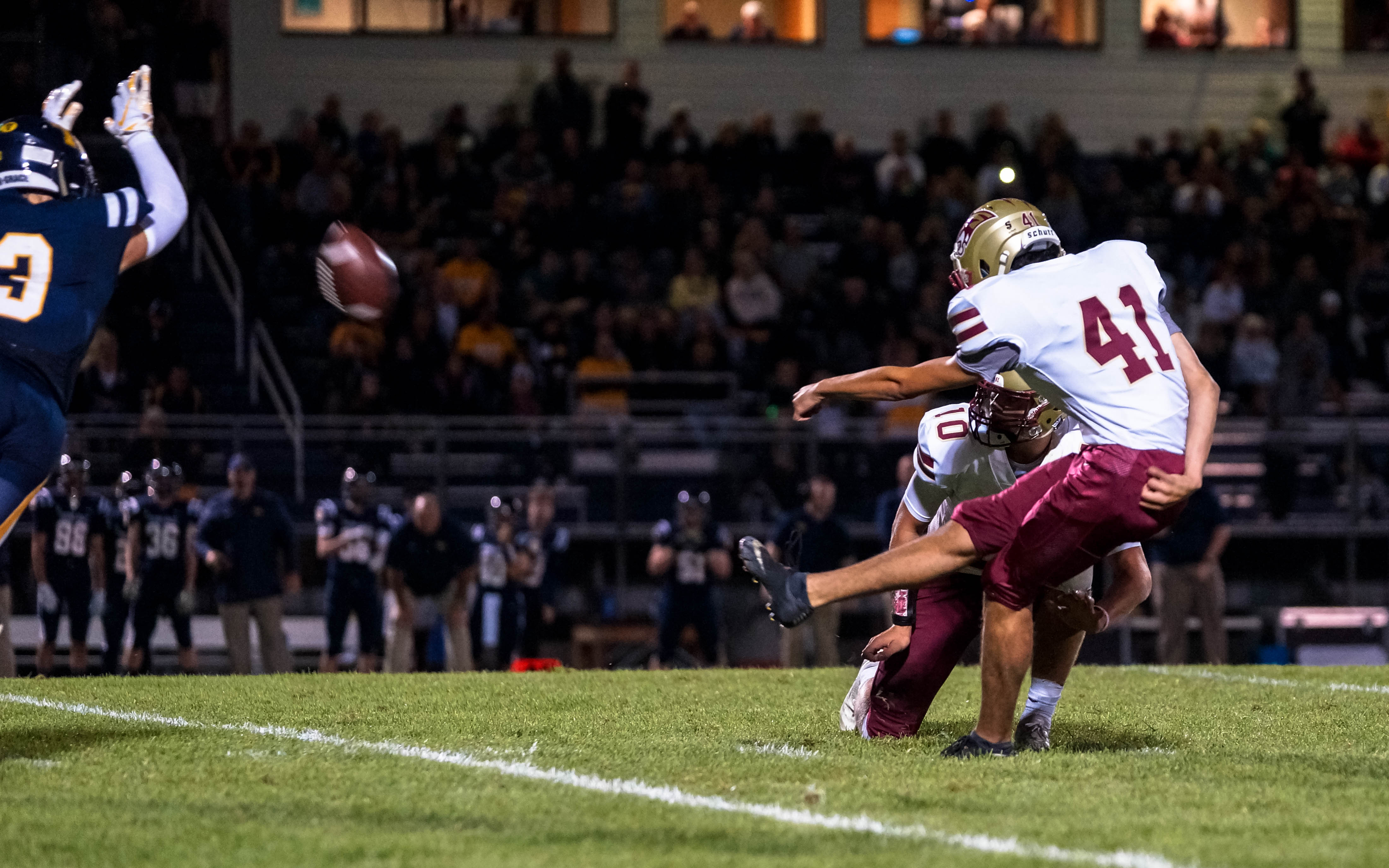 Lakeville South kicker John Olson (41) with the game-winning kick with just 13.5 seconds left to play against Totino-Grace on Thursday night. The Cougars beat the Eagles 13-10. Photo by Korey McDermott, SportsEngine

Lakeville South hadn’t scored a point heading into the fourth quarter at Totino-Grace High School Thursday night and the home team had a seven-point lead through much of the game.

Kicker John Olson put the Cougars’ first three points on the board in the fourth quarter, and he would go on to score the game’s last points, too.

Olson, after sequences of possession changes, found himself standing over the ball waiting to boot the kick that would likely decide the game. Olson converted the 42-yard field goal attempt with 13.5 seconds left on the clock, giving the Cougars (1-0) the lead and an eventual 13-10 win over the Eagles.

“I was just thinking ‘remember my steps, remember my training, all the hours that we’ve been through with the team, and just trust in them,’” Olson said.

The senior practiced kicking field goals during halftime. It seemed like he was waiting for his opportunity.

“I wasn’t expecting to [have a huge impact], but the game goes how it goes,” Olson said.

Defeating successful programs such as Totino-Grace, with its 10 state championships, helps build more confidence for the Cougars, who are coming off a season in which they started 1-5 and flipped it to 6-6 after a five-game winning streak to reach the Class 6A state tournament semifinals. 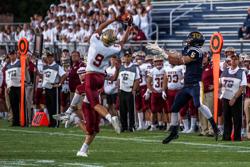 “We would rather play great teams like Totino-Grace and see where we are, so to find a way to win is extra special,” Krebs said. "We’ll talk about this as Game 1, we’re really trying to get to Game 9, 10, 11, 12 and this is one step in getting there.”

Olson is the type of player that brings a lot of value to a squad looking to make the kind of run Krebs is aiming for. Olson, meanwhile, said he looks forward to getting more chances to provide for his team.

“[Having Olson in late-game situations] changes everything for us,” Krebs said. “We were talking about we just need to get to the 30 [yard line] to give him a good chance. It allows you to change how you call plays. We have a lot of confidence in him. I think he is one of the best kickers in the state of Minnesota.”

The confidence that the Cougars have in their three-year starting kicker rewarded Lakeville South as Olson proved to be the difference in Thursday’s game.

Totino-Grace (0-1) quarterback Kristoff Kowalkowski put on a passing clinic throughout much of the game, and he completed a pass of nearly 60 yards to Isaac Richards in the fourth quarter. Lakeville South’s defense, however, forced Totino-Grace to settle for a field goal on the possession to tie the game at 10 instead of taking the lead back.

“That’s a very good quarterback and they’ve got good receivers,” Krebs said. “They got behind us and made a play. It was a credit to our defense to hold it to a field goal there.” 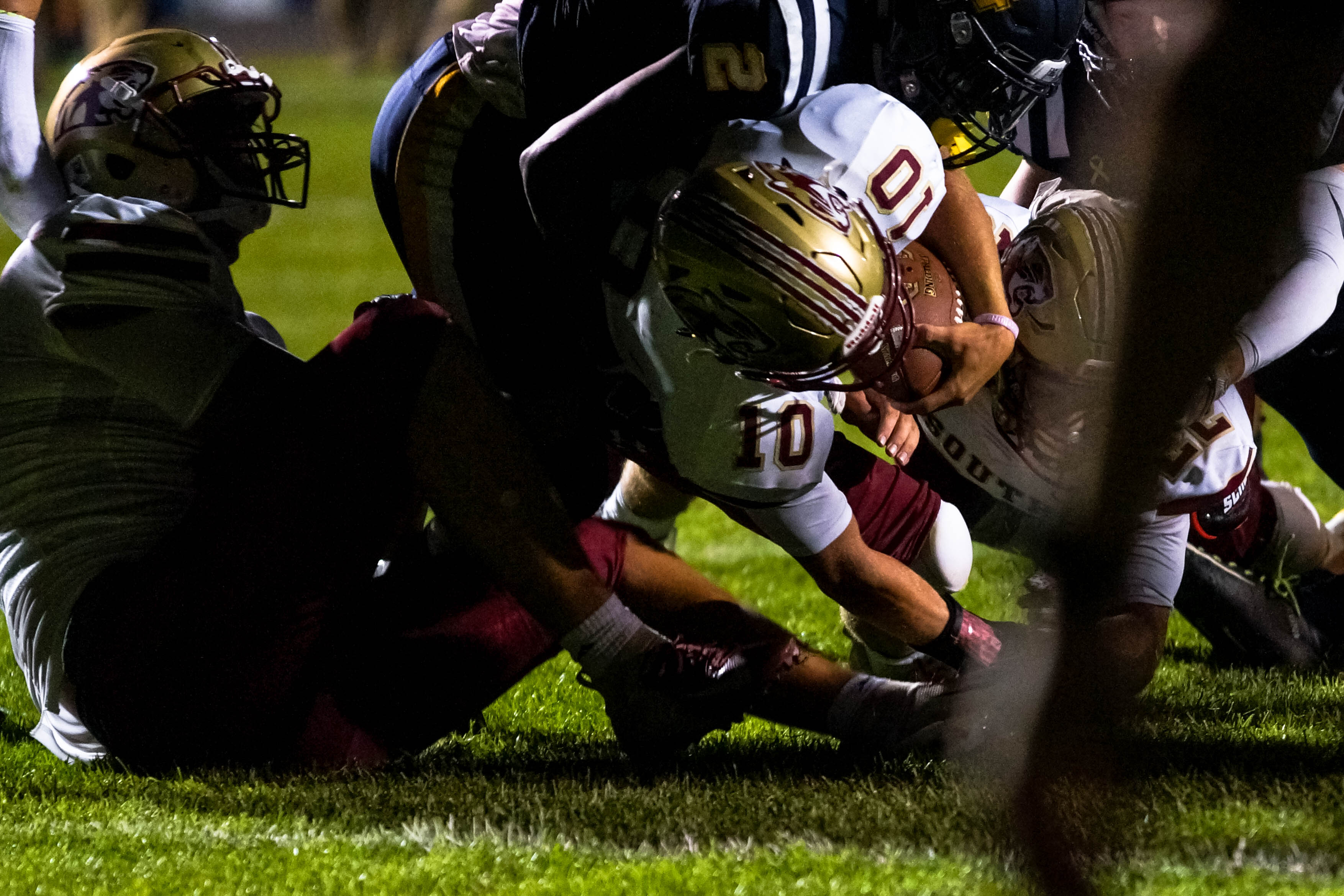 Lakeville South quarterback Reid Patterson lunges for a touchdown to take the lead against Totino-Grace late in the fourth quarter on Thursday. Photo by Korey McDermott, SportsEngine

John Olson’s late field goal tipped the scales in Lakeville South’s favor as the Cougars took down Totino-Grace 13-10 in the season opener at Totino-Grace High School on Thursday.

Lakeville South quarterback Reid Patterson rushed for a touchdown with under five minutes to go in the fourth quarter, putting the Cougars ahead 10-7. Eagles kicker Matthew Pettijohn laced his field goal from 26 yards out to tie the game at 10.

In the game’s final moments, the Cougars were able to set up Olson who converted a 42-yard field goal with 13.5 seconds left on the clock. Lakeville South scored all 13 of its points in the fourth quarter.