Through fresh eyes: Five metro teams with past success start anew with change at the top

Day two of the Star Tribune's prep football preview looks at new leadership at teams aiming for what one coach calls "a way to build a better mousetrap.” 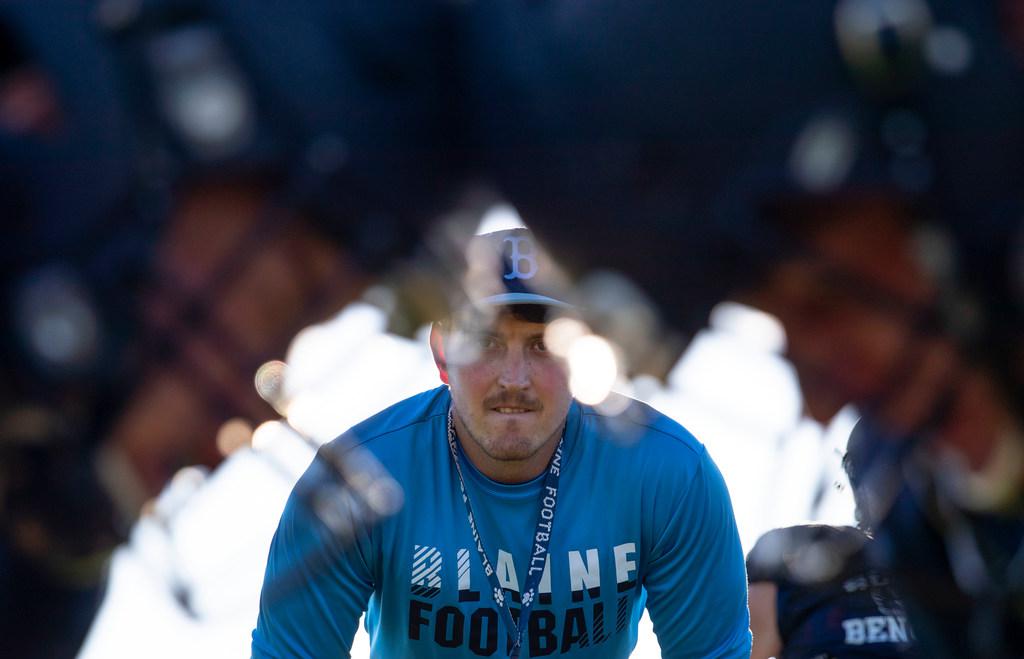 New Blaine coach Mike Law watches as linemen go head-to-head in practice on Aug. 19. Law teaches by doing. He runs between drills with his players and lines up next to them to better explain technique. Photo: ALEX KORMANN • alex.kormann@startribune.com

Five metro football programs with a history of success, some more recently than others — Anoka, Blaine, Cretin-Derham Hall, Orono and the SMB Wolfpack — share another bond this season: new head coaches.

Four had been assistant coaches within their same programs. One arrived from elsewhere. Through new philosophies and play-calling, all five are aiming for, in the words of new Blaine coach Mike Law, “a way to build a better mousetrap.”

A look at each team (in alphabetical order):

Anoka: Creating ‘a sense of urgency'

The goal: Return the Tornadoes, 1-17 the past two seasons and without a winning season since 2011, to the level they achieved as state champions in 1990 and 1994. “There’s a lot more talent here than we started with at some of the other places,” said Bo Wasurick, who revived football programs in Texas and mostly recently at Jordan. “The biggest challenge is establishing a sense of urgency. There’s a little bit of acceptance for the way it’s been. They are OK with being average. But we feel this place can be special.”

The plan: Wasurick put the acronym “E.A.T.” on players’ practice shorts. “Effort, attitude and trust,” he said. “To me they are the three most important things in an organization. They are all things that we can control, and take zero athletic ability.” On the field, Wasurick installed a new spread offense. He also wants to use top athletes on both sides of the ball.

A player’s take: “It was early on that I put my trust into him,” said senior linebacker Cody Lindenberg, who has verbally committed to the Gophers. “Because he wants to work on the how and the why we’re going to do things. That’s when I started to believe in him more.”

Did you know? As a senior in 1999, Wasurick played tight end for the Gophers. He drew his mother’s ire for tussling after a play with Penn State linebacker LaVar Arrington during the Gophers’ upset victory in Happy Valley. 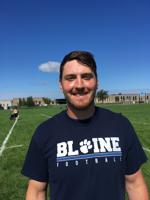 The goal: Maintaining Blaine’s place among the metro area’s top teams. The Bengals were Class 6A state tournament semifinalists the past two seasons and took an 11-0 record into U.S. Bank Stadium last fall. Mike Law, the program’s third head coach in as many seasons, said, “My job is to make sure that I’m evaluating the things we have been doing for years that have been successful and at the same time analyze some of the things that we can improve on.”

The plan: Law served as offensive coordinator last season and will continue running a high-tempo, spread attack. Junior quarterback Tyler Schuster, a transfer from Anoka, will start. Backfield mate Will Frederickson ran for 1,006 yards and 11 touchdowns as a sophomore last fall. New defensive coordinator A.J. Van Voorhis, a former Champlin Park standout, is “a guy that uses a four-man front, which we really like, especially at playoff time when the weather starts getting bad,” Law said. “And he’s versed in playing against spread teams.”

A player’s take: “He’s got a good plan, a good direction for the program,” said senior linebacker Zach Shaffer, the team’s leading tackler last season. “We’re not built to lose; we’re built to win. We don’t have experience, but we have the talent we need.”

Did you know? Before arriving at Blaine, Law served as head coach for Oberlin High School in Oberlin, Ohio. Before that, he spent three seasons at Oberlin College, serving as a recruiting coordinator and coaching the offensive line. 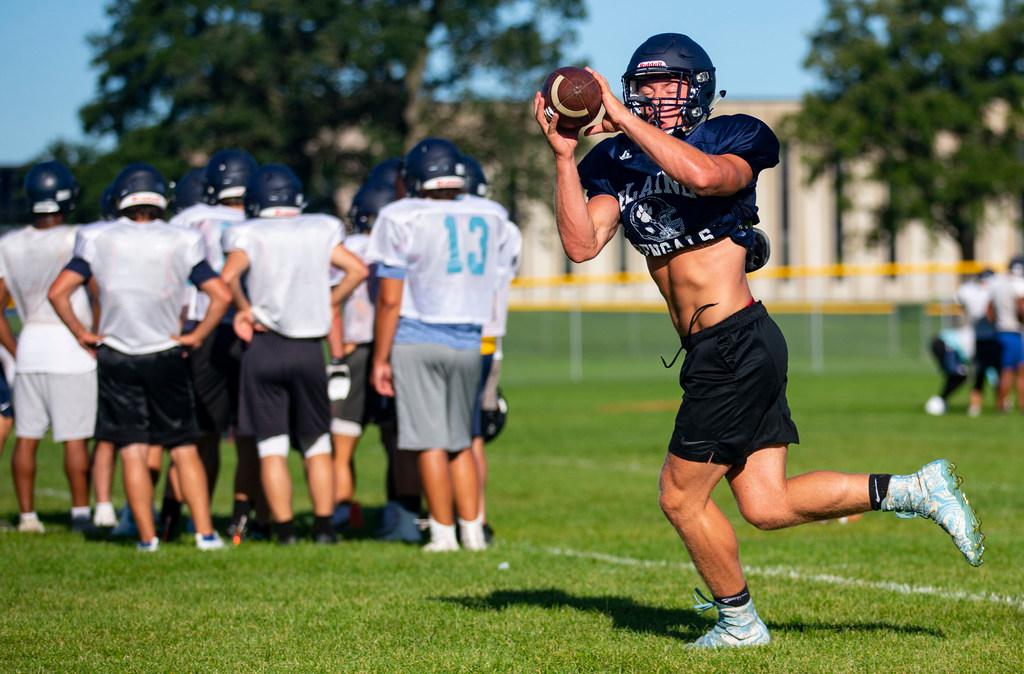 Blaine running back Will Frederickson caught a pass in the flat during practice on Aug. 19. Frederickson was vocal and exuded confidence as a team leader. Photo: ALEX KORMANN • alex.kormann@startribune.com

Cretin-Derham Hall: Playing for something more 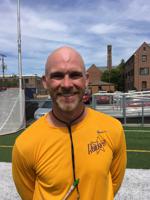 The goal: State tournament participants in 20 of 22 seasons from 1988 to 2009, the once-mighty Raiders have made just three trips since. Chuck Miesbauer, a 2003 alum and an assistant coach on the 2009 state championship team, wants to win, sure. But he seeks to instill purpose. “A great foundation has been laid here,” Miesbauer said. “We remind them they play for something more than just winning football games. They play for a community.”

The plan: Miesbauer likes his team’s mix of playmakers outside and big guys up front. “We are very skilled on the perimeter on both sides of the ball, a lot of really great athletes,” he said. “And we have grit on the inside. We’re not going to be 280 pounds across the board. But we’ve got a lot of tough guys that play to the whistle.” He hopes to expand the playbook as players better grasp new schemes and terms.

A player’s take: “The first thing about him, for sure, is his energy,” said senior running back Tony Underwood, in his third year with the varsity. “There’s been a lot more energy around the building and on the field. That’s huge for us. Also, tradition. He’s from here and that helps us in terms of who we are and why we play.”

Did you know? Miesbauer’s primary concern is with his own lack of experience with local competition. He has worked the better part of the past decade at college programs in North Dakota and South Dakota. 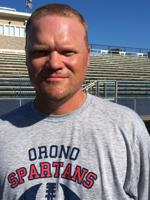 The goal: Orono’s past two seasons ended at the hands of the eventual Class 4A Prep Bowl champion. This fall, the Spartans want to take their place among the exalted programs. McPherson instituted the team motto, “One Team. One Dream. Rise as One,” and installed a “Spartan Pride” plaque on a locker room wall. Players touch it each day as they leave practice. “We’ve got a lot of great individuals, but we can be greater as a team if we all come together,” McPherson said.

The plan: The defense, anchored by end Danny Striggow, who verbally committed to the Gophers, must take the lead as a young offense develops. Striggow and fellow captains Jack Patterson, Nick Ruhland and Joey Tilzer all played under McPherson when he was a defensive coordinator. Meanwhile, junior Teddy Deters quarterbacks a new-look offense that will go back to huddling between plays. Ultimately, McPherson is demanding more grit from players. “I always tell them that their bodies can do a lot more than they think they can,” McPherson said. “So I want them to be mentally tough. I think we haven’t been there in the past, and I think we can get there.”

A player’s take: “He’s an intense guy,” Striggow said. “If you’re not bringing your all and you’re not mentally prepared, he’s not happy.”

Did you know? McPherson has served as Orono’s wrestling coach since 2011, rebuilding a program that once had seven athletes to one that’s produced individual state champions. 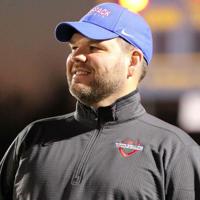 The goal: Dynamic quarterback Jalen Suggs gives the SMB Wolfpack an early lead in the race toward defending its Class 4A state title. In addition, playmaking receiver Terry Lockett returns from a year spent at a sports academy in rural Ohio. Add star linebacker Kaden Johnson and you get a first-class nucleus.

The plan: Chris Goodwin, a coordinator on both sides of the ball during his previous four seasons with the Wolfpack, said rebuilding the offensive line “will make or break our season.” Sophomore left tackle Luke Sugalski (6-foot-5, 240 pounds) “has the makings of being a Division I tackle,” Goodwin said. Two potential starters tip the scales at 285 and 320 pounds, respectively. That’s good size. But what about the size of players’ egos? To keep them in check, Goodwin instructs the seniors to carry water to practice and tidy up the locker room. “Not that we have a problem,” Goodwin said. “But it would be easy to go that way with all these star players.”

A player’s take: Goodwin’s lesson found its mark. Johnson said if the team had a motto, “I’d say it’s, ‘We over me.’ Coming off that state championship, Coach is holding us to a high standard. He’s making sure we’re putting the work in.”

Did you know? Goodwin’s first coaching gig was Minnesota West Community College in Worthington, where he worked under head coach Don Varpness and alongside the coach’s son Vince, current Burnsville coach. Goodwin later served as a graduate assistant coach at Minnesota during Wasurick’s playing career.