Monday is the first day of high school football practice, and ties to the Vikings make it fresh for Eagan. 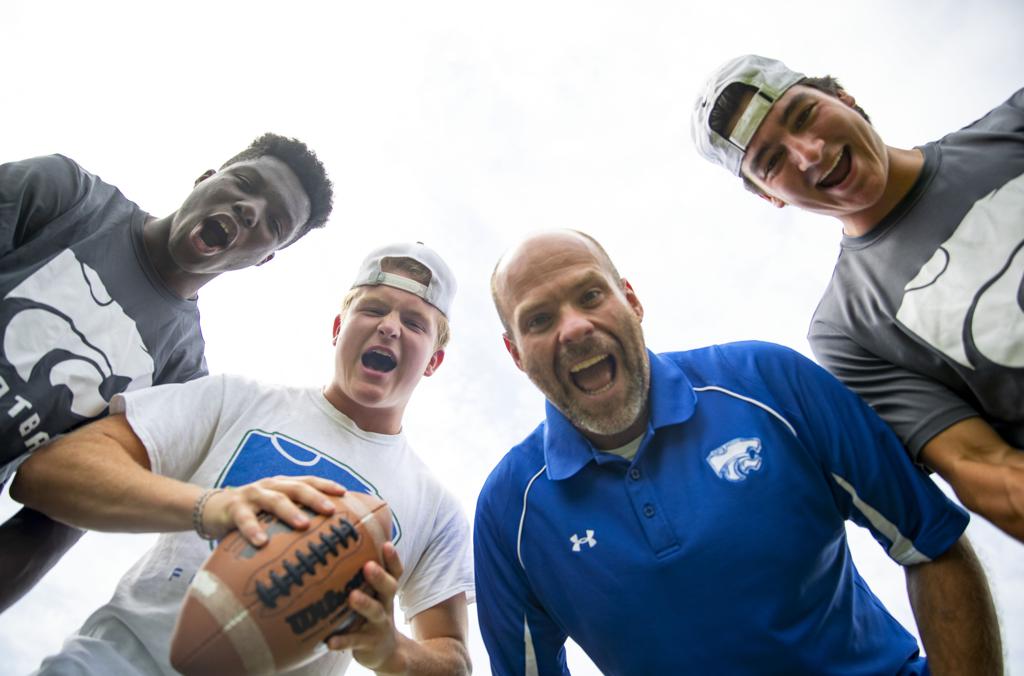 Eagan leaders, from left, Charles Otu, Zach Wollak, coach Nick Johnson and Zack Merwin are bought in on turning around a program that has won only one game in the past three years. Photo: ALEX KORMANN • alex.kormann@startribune.com

The Twin Cities Orthopedics Performance Center sits on the northern edge of Eagan, the south-metro suburb whose profile has exploded as the new home of the Minnesota Vikings, Minnesota’s most popular sports franchise,

Almost 6 miles due south sits Eagan High School, with a little more than 2,000 students. Known for its strong commitment to technology, state championship-caliber volleyball and soccer programs, it holds the No. 8 spot in Minnesota in the most recent U.S. News & World Report rankings of best high schools.

And a football team that has won just one game in the past three years.

This year, however, the level of interest in Eagan football is swelling, thanks in part to the coincidental association with TCO but also because of the hiring of first-year head coach Nick Johnson, whose energy and enthusiasm can be measured by the gigawatt.

“Man, I am so excited to get going,” Johnson said earlier this month as he tended to last-minute details before heading for his cabin and one last respite before the chaos of the football season, which begins in earnest Monday, the opening day of practice for fall sports.

There’s no sugarcoating the task in front of him. Eagan is the only school in Class 6A that has never been to a state tournament. The Wildcats came close, losing to Cretin-Derham Hall twice in the section finals — in 2000 (vs. Joe Mauer) and again in 2009, when the Zach Zenner-led Wildcats lost 21-20 and the Raiders went on to win a state championship.

“That’s pretty much it,” said Johnson, who has taught at Eagan since 2001 and was assistant football coach there until 2016, when then-head coach Rick Sutton stepped down. Johnson thought he was in line for the job then, but a messy candidate search at the administrative level caused factions to form. The job went to an outside candidate, Ben Hanson, who resigned after last season with a three-season 1-26 record.

Johnson spent two seasons as an assistant at Lakeville North before getting hired last spring for the job he wanted three years ago.

“We were all rooting for him,” senior linebacker Zack Merwin said. “We wanted him to be the guy.”

Since them, he’s been tireless in laying the groundwork for change. His first order of business was to recruit. Numbers had dropped off as losses added up, and he had seen plenty of potential football players walking the school’s hallways who were not out for the team.

“I talked to just about everybody I saw about playing football,” Johnson said. “Our numbers are down, but we gave out about 90 sets of pads this year, grades 9 through 12, so they might be picking up.”

Changing attitudes was his other task. He witnessed firsthand at Lakeville North, the 2018 Class 6A champion, how huge a role pride — in the school, in the program — played in the Panthers’ success.

“Everybody over there is so bought in,” he said. “The coaches are great. They’ll do anything, no matter how small, to promote the team. And they’re so appreciative of everything you do. They make it so everybody feels that they matter. I want to get our guys to buy in like that.”

The returns on summer workouts are encouraging. Numbers were way up in weight room workouts. The players say enthusiasm is as high as they can remember.

“In other years, we’d have about 20 kids show up in the weight room at first, and by the end of the summer we’d have maybe five, seven kids. It was ridiculous,” Merwin said. “This summer we had, like, 50-plus every day.”

Having the Vikings as neighbors is already starting to pay off. Football is more prominent in the thoughts of students and locals. The Wildcats have made a few trips to TCO, for summer leagues and workouts. Last season, they played Farmington in the first high school game played there and had their best showing of the season, falling 41-28 after cutting a large deficit to five points in the fourth quarter.

“There’s more pride in football out here, having the Vikings in our backyard,” senior linebacker Zach Wollak said. “I feel it myself. There are expectations, and we’ve got to carry them.”

When the Vikings were headquartered at Winter Park in Eden Prairie, the high school team there boasted more than a few offspring of coaches and front office personnel, such players as JD Spielman, Corey Frazier, Nick Davidson (son of former offensive line coach Jeff Davidson) and Jay Foreman.

“We don’t have any of those types yet, but why not down the road?” Johnson said. “I know that Mike Zimmer looked at a house in this area.”

No one is talking state tournament quite yet, but starting from the bottom means there’s nowhere to go but up. No one is expecting a lot of victories. For now it’s more about establishing a solid foundation.

“We want to show that we’re competitive and not easy,” senior defensive back Charles Otu said. “We want people to know we’re not a practice game. They’re going to come out and see that we can compete.”