Totino-Grace has its eyes on a bigger prize 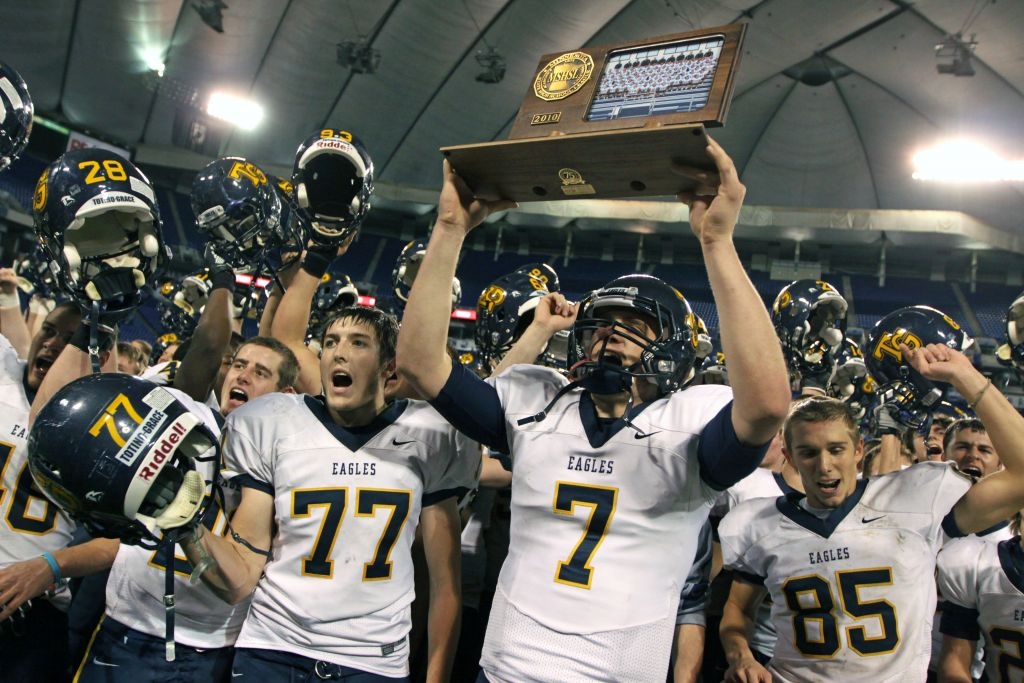 Totino Grace quarterback Alex Kreuser held the trophy as the team celebrated their win over Rogers for the Class 4A Championship.

The conference title race is a free-for-all again since Totino-Grace is playing too few conference games to be eligible. But the Eagles -- winners of six of the past eight Class 4A state titles -- have bigger goals in mind. They are opting up to 5A this fall.

• Generally regarded by conference coaches as a team in the mix for an NSC title despite unproven players at quarterback, running back and the secondary. The Red Knights enjoy some continuity up front with three returning offensive linemen and two on the defensive side.

• Three starters return on both sides of the ball, including a solid linebacking corps. That said, the Wildcats must improve defensively and rebuild a potent offense to contend for more victories.

• The Hylanders have improvements to make across the board after ranking last in the conference in points scored (12 per game) and ninth in points allowed (35.2) in 2010.

• The Hawks must stimulate an offense that finished eighth in the conference, averaging 19.0 points per game. Standout linebacker Taj Rich will lead the defense.

• Priority No. 1 is completely rebuilding a defense returning no starters. What the Tigers lack in experience they make up for in enthusiasm coming from a sophomore class that went undefeated as freshmen. On offense, three linemen, a quarterback and a running back return.

• The team likes its options at running back and wide receiver but must work in a new quarterback. There are also plenty of questions in the secondary, though an experienced defensive line could take the pressure off. Geisler lauded the team's offseason workouts and expects the Knights to be physical.

• Nitti is the program's fifth coach in the past seven seasons. He must coax better performances out of a Vikings defense that ranked eighth in the conference in points allowed (30.1 per game). Four defensive starters return for North Branch, and two return on offense.

• The Saints count 10 seniors among the 11 returning starters, a group Lindquist is excited to see take charge on Friday nights. The offense boasts continuity with three veteran linemen, two at quarterback and a running back. A stingy defense will need some rebuilding.

• High on the to-do list for new coach Varpness: rebuild the offensive line and find a running back. A light but physical and fast defense must set the tone in games. And a combined 16 junior and sophomore starters must play with a savvy beyond their years if the Orioles are to succeed.

• Among the Panthers' core of 15 returning starters are five offensive linemen. The skill positions will be retooled with converted defensive players Noah Waiwaiole and Brandon Jones taking over at running back and quarterback, respectively.

• Winners of six 4A state championships in the past eight seasons, the Eagles opted up to 5A this season. Talented part-timers must take ownership of their roles throughout the lineup. The Eagles boast good size up front on both sides of the ball and return two solid safeties.

(Totino-Grace is ineligible for the conference title.)