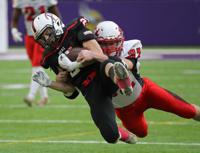 Pierz sped up St. Croix Lutheran’s veer-option offense and the approach slowed down the Crusaders.

Aggressive, physical play from the Pioneers’ defense fueled a 34-21 victory Saturday in the Class 3A Prep Bowl at U.S. Bank Stadium.

“We were able to get pressure on them and make them make decisions really quick,” senior linebacker Cohlton Boser said.

The results were quantifiable beyond the final score. West St. Paul-based St. Croix Lutheran tied a Prep Bowl record with eight fumbles and lost four. The miscues gave a matchup of the two best 3A teams a lopsided ending.
Pierz (13-0) ended the regular season No. 2 in the Associated Press rankings, one spot behind St. Croix Lutheran (12-1).

“In big games you’ve got to hold onto the ball,” Crusaders quarterback Jonathan Liesener said. “Simple as that.”

St. Croix Lutheran possessed the ball well to start the third quarter. A 14-play, 75 yard drive ended with a clutch touchdown pass from Liesener to receiver Garett Maag on fourth-and-goal from the 21-yard line.

The Crusaders trailed 21-14 but got no closer to redeeming last year’s runner-up finish.

“We knew they weren’t going to quit, and we knew we just had to get back to work on offense,” Pierz coach Leo Pohlkamp said.

That meant a steady diet of running backs Jalen Jansen and Reese Kapsner. The Pioneers only completed one pass, hitching their fortunes to Jansen and Kapsner.

St. Croix Lutheran fumbles meant Pierz started its final two scoring drives from the Crusaders’ 31- and 35-yard lines. Kapsner finished both. He and Jansen combined for 306 yards on 36 carries and scored five touchdowns.

“You needed three or four guys to tackle their backs because they are so elusive,” St. Croix Lutheran coach Carl Lemke said.

Jansen credited the offensive line, a physical band of brothers known collectively as the Honey Badgers. They powered Pierz to its third state title since 2004.

“They’ve been practicing hard all year and always getting the job done,” Jansen said. “You couldn’t ask for a better line.”

Pierz captured the Class 3A Prep Bowl championship with a 34-21 victory over St. Croix Lutheran of West St. Paul on Saturday at U.S. Bank Stadium.