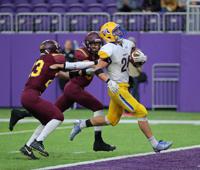 Isaac Hennen ran 23 yards for a touchdown in the first half. (Click on photo to see more)

It was Isaac Hennen time.

Minneota was struggling, trailing Wabasso by a touchdown early in the second quarter. The Vikings defense had just stopped the Rabbits on downs in the shadow of their goal line. The time had come to lean on their best player.

Hennen didn’t disappoint, carrying the ball nine times for 94 yards on the ensuing drive, capped by a game-tying touchdown. The Wabasso challenge answered, Minneota (14-0) rode that momentum to a 28-13 victory Saturday and its third Class 1A championship in the last four years.

“It’s never really the game plan going in, but it’s always plan B,” Minneota coach Chad Johnston said of turning to the team’s 6-3, 210-pound star running back. “When the grind’s got to go, we definitely have to go through No. 24 a little bit.”

They went through No. 24 more than a little. Hennen lugged the ball 35 times for 291 yards and three touchdowns, making up for a Minneota passing game that struggled to find its footing.

“Things weren’t really clicking in the pass game, but like [Coach] J was saying about plan B, we have the best football player in the state in Isaac Hennen and he just dominated today,” Minneota quarterback Alex Pohlen said.

The reliance on Hennen came as no surprise to Wabasso (13-1). The two schools are only 40 miles apart and the teams are very familiar with each other. Wabasso ended Minneota’s bid for a three-peat last season with a victory in the section semifinals.

Stopping Hennen at U.S. Bank Stadium was a different story.

"That’s kind of the game we expected,” Wabasso coach Joe Kemp said. “We know each other very well. We expected a big dose of Hennen and we got it.”

Hennen took the praise in stride, deflecting individual accolades in favor of a team-first approach.

“I like the running game, but to me, whatever’s working is what we should go with,” he said. “Today, it was just pounding it at them.”

After a first half filled with mistakes, Minneota simplified things and leaned on its best player, senior RB Isaac Hennen, to overpower Wabasso 28-13 in the Class 1A championship game Saturday at U.S. Bank Stadium.

The Vikings (14-0) spotted the Rabbits a 7-0 lead after having a punt blocked, but tied the game with a lengthy second-quarter drive that was all Hennen. He rushed nine times for 94 yards on the march and scored on a 23-yard run.