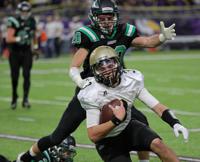 Caledonia quarterback Owen King scrambled in the first half. Click on photo for more pictures.

Owen King, Caledonia’s exceptional quarterback, sat at the podium in the news conference after the Warriors’ 57-6 dismantling of Pipestone in the Class 2A championship game, soaking in another last-time experience.

He was asked about tying a Prep Bowl record for combined touchdowns in a game – King passed for five and ran for one, equaling a 23-year-old record – and if that held any special meaning.

“No, not really,” King answered bluntly. “Coming out on top is what we came here to do and I’m really excited we were able to accomplish that.”

Nothing cocky or arrogant, just pure King, putting team concerns ahead of an amazing individual career.

In three years as the team’s starting quarterback, King never lost a game, posting a gaudy 41-0 mark. Tall and strong in the pocket, he threw for 2,858 yards this season, after adding in 246 passing yards on Friday, and 45 touchdowns. He can move a little bit, too, as he showed with repeated scrambles that bought him time to find receivers downfield.

“Is he quick,” Pipestone coach Clay Anderson marveled. “Any other quarterback, we probably have eight sacks in that first half. But he just made us miss, miss, miss.”

Not surprisingly, King is a Mr. Football finalist and many feel he’s talented enough to play at a high-Division I level. But Friday was the last time the 6-3 King will don the shoulder pads and helmet. He’s signed to play basketball with South Dakota State, a commitment he made before his junior year and one from which he’s never wavered.

“I’ve love everything about basketball, day-in and day-out,” King said. “I love football, too, but I love basketball more.”

King departs as the best quarterback in Caledonia history and, with 8,158 yards and 137 touchdowns passing, one of the best Minnesota has produced. Those numbers, however, matter little.

“I want to be remembered as a good teammate, first and foremost,” he said. “A guy that would do anything to help his team win and help the team reach its goals.”

In his final football game ever, Caledonia’s Owen King looked every bit as good as advertised.

King, who has signed to play basketball at South Dakota State, completed his high school career with a 41-0 record as a starting quarterback.

There was more to Caledonia than simply King, however. The Warriors defense shut down the Pipestone offense, which was playing without starting quarterback Cody Thompson. The Arrows (12-2) were held to a minus-11 yards of total offense and without a first down in the game.