Everything Totino-Grace football coach Jeff Ferguson has come to admire about Eden Prairie worked in his team’s favor in a 17-14 victory.

“Over the years they just seem to make something happen,” said Ferguson, a nod to Eden Prairie’s 10 state championships since 1996.

But it was Totino-Grace in control on the road when it mattered Thursday. Quarterback Kyle Halverson found Ivan Burlak for a 22-yard touchdown on fourth down in the final quarter. The Eagles secured the victory by turning Eden Prairie over on downs and later a key Brady Bertram third-down conversion.

“I give them a lot of credit,” Eden Prairie coach Mike Grant said. “They came in here and made plays.”

It was a rematch of last season’s Class 6A state tournament quarterfinals, when Totino-Grace upset the four-time defending champion Eagles. The resiliency fueling that victory came through again in the season opener.

“It sets a great tone,” said Burlak, who also rushed for a touchdown in the second quarter. “It just shows that we competed in the summer and worked hard for it.”

With a nod to their now-annual playoff meetings, Grant said: “I told Fergie, ‘We’ll see you again.’ ” 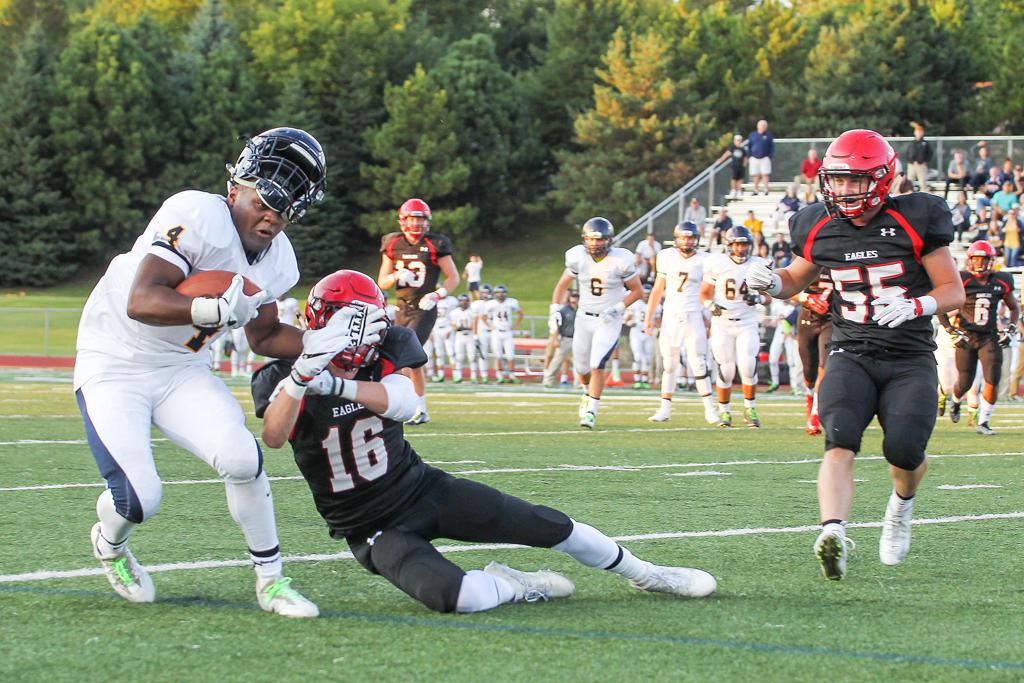 Running back Gayflor Flomo (4) lost his helmet on this second-quarter run. He also lost his yardage when he was called for an unsportsmanlike penalty after the play. Photo by Mark Hvidsten

A touchdown pass on fourth down keyed a 17-14 Totino-Grace comeback victory at Eden Prairie.

Devan Greene Jr. put Eden Prairie ahead to in a 14-10 earlier in the final quarter. He raced 33 yards for the score to give the Eagles’ their first lead since the opening quarter.